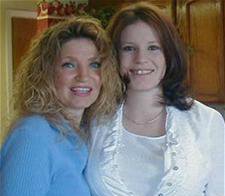 My name is Rhonda Ramsey, and on December 28, 2008, I received a telephone call that no parent ever wants to receive. After two previous suicide attempts, and many years of battling bipolar disorder, my daughter Melissa lost her fight with the illness. Even though I knew bipolar disorder caused my daughter to have dramatic mood swings, and at times interfered with her ability to make good choices, nothing could have ever prepared me for losing my child to suicide.